PENNOVATION BY THE NUMBERS

Backed by the University of Pennsylvania, Pennovation Works is a 23-acre entrepreneurial ecosystem with a central business incubator driving academic research to commercialization. True to vision and just two years from the grand opening, the site has emerged as a sought-after hub for innovation and industry, where growing numbers of researchers, entrepreneurs, and industry partners are finding fertile ground for propelling solutions forward to some of the most pressing issues of our time.

We take a look back at the stats, stories, and snapshots that shaped an extraordinary year in this ecosystem of innovation, where ideas go to work.

Download the PDF of the Pennovation Works Year in Review 2018.  (Full text below.)

WHAT’S GOING ON AT PENNOVATION?

Between the nearly 100% occupied dedicated space inside the business incubator known as the Pennovation Center and the rapidly developing adjacent buildings on the Pennovation Works site, there’s a lot to see at 3401 Grays Ferry Avenue on any given day. Notable visits include guests from as close as the neighborhood and as far afield as South America, Western Europe, and East Asia.

In 2018, two new partnerships were formed to add a global element to the growing ecosystem of innovation emerging at Pennovation and across the Greater Philadelphia region at large.

…ON THE WAY UP

Pennovation Works serves as a home away from home and ideal facility partner for inventors, and researchers from a broad spectrum of disciplines. This year saw significant interest from entrepreneurs in the metro Philadelphia region in laboratory and innovator spaces, as expanding startups sought thoughtfully executed places to land – with collaborative neighbors and facilities and staff nimble enough to accommodate evolving wants and needs. In ideal-use scenarios, start-ups grow from a coworking desk, to an Inventor Garage, to a planned lab, office space, or custom environment in the larger Pennovation Works site. Meet seven of the companies on the way up:

…ON THE FAST TRACK

As innovation hubs and incubators emerge as the smart solution for universities, entrepreneurs, researchers, and students interested in transforming their creative ideas into viable commercial ventures, Pennovation’s community of innovators continued to push world-class research forward in exciting and unpredictable ways.

More than 70 programs at the Pennovation Center and around the Plaza attracted 5,000+ attendees. An exciting calendar of events and a commitment to open the doors to the public as often as possible paved the way for visits from venture capitalists, industry leaders, local job seekers, high school students interested in entrepreneurship, future coders, women in technology, and more. Numerous others were introduced to the spirit of ground-up innovation now synonymous with Pennovation at industry events and tradeshows. Highlights from 2018 include:

A drone’s eye view of Pennovation Works showcases a web of flexible and responsive facilities grouped for innovation, technological development, and artistic production/exhibition. On the ground, progress made towards the initial vision of a phased approach to development of the site includes:

A bustling neighborhood since the mid-1800s, Grays Ferry continues to experience the upturn in population and business interest occurring in and around the city. Support for a thoughtfully developed commercial corridor benefiting all who work and live in the area continues to grow.

…ON THE FRONT PAGE

2018 saw a surge in press coverage for Pennovation, ranging from articles profiling community members driving some of the biggest and best breakthroughs in life science, technology, and artificial intelligence to podcasts and videos highlighting the University of Pennsylvania’s lead role in harnessing and commercializing the tremendous creative potential in the region. Noteworthy stories include:

A Penn-made robot appeared on The Daily Show

SXSW Day 2: How Philly Stands Out at the Trade Show

The Hardest Working Dogs in PA

A Bustling Summer at Pennovation

The Future of Flight: AI in the Cockpit

The State of University City 2019 and The Future of Work

…IN A FEW WORDS

This past year, Pennovation Works proved a magnet for people with desire for experimentation and increased knowledge and a passion for translating exciting discoveries into products, ventures, and services that will make meaningful improvements to how we live, work, and play. The University of Pennsylvania and Pennovation have made great strides bridging intellectual and entrepreneurial initiatives in the name of advancing knowledge, generating economic development, and contributing to a regional ecosystem of innovation. 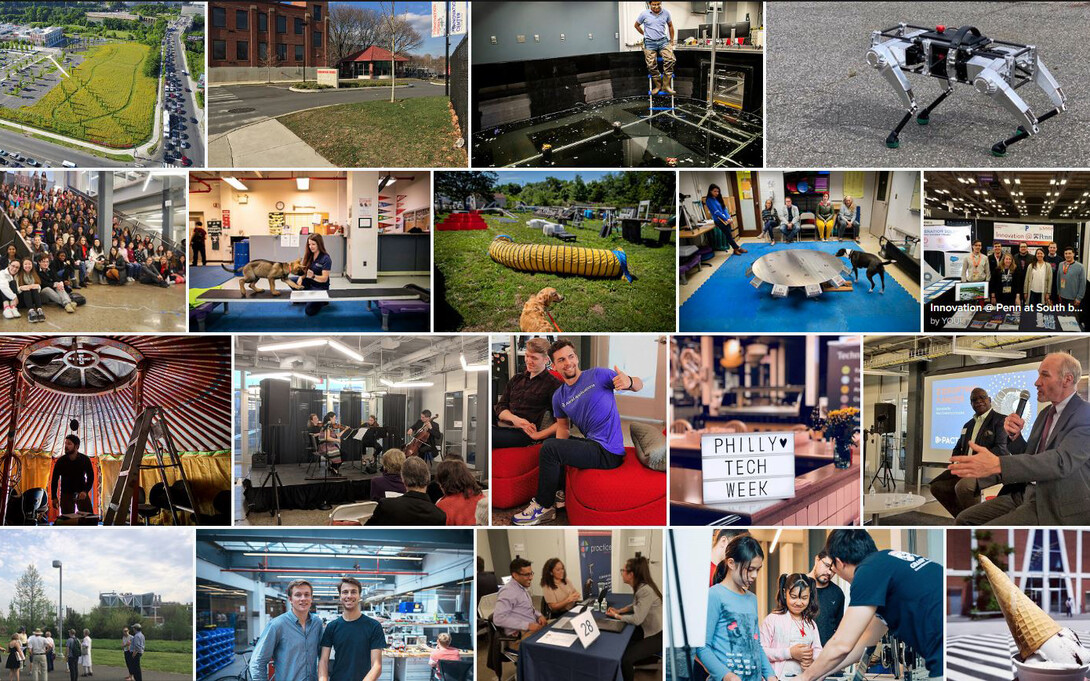